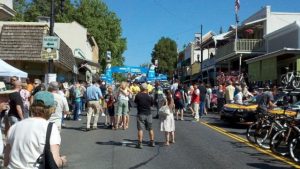 Amgen Tour officials were pleased with the showing that Sonora put forth hosting Stage Four of the largest bicycle race in North America. Around 120 cyclists took off from Courthouse Park at 10:35am and the stage will wrap up in Clovis at around 4pm. The Sonora streets were filled with onlookers, and many cycling enthusiasts were camped out in various locations along the route.

“I can’t thank the city enough for being such a gracious host,” says Kristin Bachochin, Executive Director of the Amgen Tour. “The city has been wonderful, and we’re very excited to be here.”

At 130 miles, Stage Four is the longest on this year’s tour. Before the race, riders weren’t sure what to expect. “I don’t really know the road, so it will be kind of a mystery,” said Timothy Duggan, one of the American’s on the tour. “It will be grinding and difficult, but everyone will feel the same way on a hot long day like today.”

Slovakia’s Peter Sagan dominated the first three rounds of the tour. “Today’s hard, but maybe I can finish in the big group,” he said. When asked his opinion of the turnout in downtown Sonora, Sagan added, “It’s nice. It’s very good.”

The event has provided an economic boom for the community. “Everywhere I look around, people are energized,” said Assemblywoman Kristin Olsen. “I’m excited about the economic benefits that it’s bringing our hotels, and it’s just a great day all the way around.”

Katie Jenks of Sonora was the Breakaway from Cancer, official starter of the race. “Sonora getting to host a globally known event like this is fantastic,” said Jenks. “It puts us on the map, and I think it inspires people in the county to continue to live here.”

Sonora Mayor Bill Canning was pleased with how the morning turned out. “It shows what we can to do when we work together to better the community,” said Canning. “We can grow from this.”