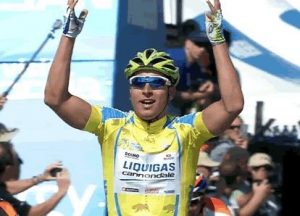 The 22-year-old has now won six stages in three years, tying him with three-time Tour winner Levi Leipheimer of Santa Rosa. Over 120 bicyclists are taking part in this year’s tour. The event started Sunday in Santa Rosa, and has traveled through San Francisco, Santa Cruz, San Jose and Livermore. Stage Four starts at 10:35am at Courthouse Park in Sonora and will conclude at around 5pm in Clovis. It is the longest stage of this year’s tour at 130 miles.

To read an earlier story about street closures and activities surrounding the Sonora event, click here.