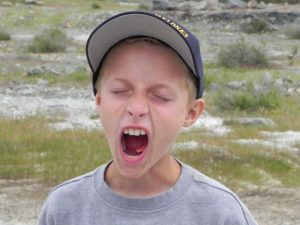 Carson Hill, CA — A couple of big bangs and flames shooting into the air is what Mother Lode residents saw and heard this morning.

It’s a dream come true for 8 year old Evan Lacks of Texas who has terminal Leukemia. Evan flipped the switch for six explosions planted by the Calaveras Sheriff’s Bomb Squad at the Carson Hill’s Quarry.

Evan screamed with excitement when he set off what police call the “Hollywood Wall of Flames”. It packs a punch, with a loud bang, flames and thick black smoke shooting hundreds of feet into the air. Police say all the explosives used are from resident who found old dynamite and asked to have it removed.

Shelley Lacks, Evan’s Mom, says he is a huge fan of fire and science and she can’t thank police and The Make-A-Wish Foundation enough for giving Evan his wish.