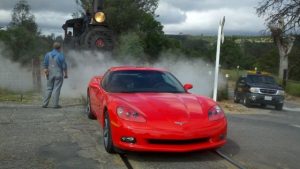 Sonora, CA — A scene from Back to the Future 3 played out in Tuolumne County Friday morning.

The five Rotary clubs in the county are teaming up to raise money for Railtown 1897, which is scheduled to close effective July 1st. A Gala will be held on June 9th at the park, and part of the plan is to raffle off a 2012 Corvette.

Bell Mooney Road was blocked off for a short period this morning for a photo shoot to recreate the scene where Sierra #3 pushes the Delorean, only this time it was the Corvette. As many Mother Lode residents know, Sierra #3 was the train actually used in the filming of Back to the Future 3, and it is housed at Railtown.

The Corvette was donated by Sierra Motors in Jamestown. Only 800 raffle tickets will be sold, at a cost of $100 a piece. They are available for purchase from any Rotary club member.

The video shows the train arriving and the placement of the car. There are also photos posted from the shoot.