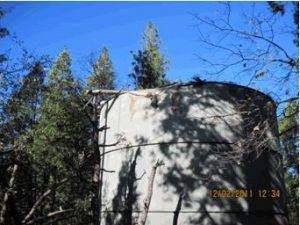 Sonora, CA — The Tuolumne Utilities District Board of Directors voted to move forward with plans to build a new water storage tank.

It will be located between Twain Harte and Sugar Pine, and have a storage capacity of 600,000 gallons. T.U.D. currently has two tanks that are out of commission. Last winter a wind storm caused a ponderosa pine tree to fall on a 125,000 gallon tank, causing extensive damage. A second nearby tank in the Lakewood area is in poor condition because of severe corrosion. Both tanks were recently drained.

Eventually two other aging tanks will be phased out and the storage will be made up by the new 600,000 gallon tank. T.U.D. officials have been looking at ways to reduce the number of tanks in the district, and this is being touted as a four for one swap.

T.U.D. Board member Ron Ringen praised the plan at last night’s meeting. “This is the future of T.U.D. with this type of consolidation plan,” he stated.