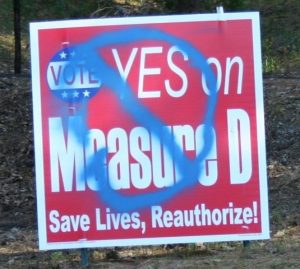 Groveland, CA — Over the weekend a dozen campaign signs in the Groveland area were vandalized.

The signs are for Measure D, a proposed Fire Tax designed to help continue the operations of the Groveland Fire Department.

It is the first case of campaign sign vandalism reported this year in Tuolumne County, but the Sheriff’s Office says it is a fairly common problem during each election season. “Unfortunately, we usually don’t get any suspects, because they drive by quickly, and it is usually not witnessed by anyone,” says Sgt. Jeff Wilson.

In this particular case, proponents of the Yes on Measure D campaign report that a witness spotted someone vandalizing the signs, and have turned the information over to authorities. An investigation into the matter is ongoing. It is noted that anyone responsible for the vandalism could face a misdemeanor charge for each sign that they damaged.