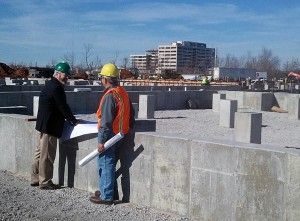 The 150,000 square foot prefabricated building is composed of 224 structural steel components engineered and manufactured at Walden Structures near Riverside. The units were delivered by large semi-trucks and train cars. Mercy Hospital Joplin was completed in only 8.5 months and opened this week.

According to the press release, it is the quickest and the largest acute care hospital to be constructed in the U.S. and meet the strict requirements of the current International Building Code.

According to John Farnen, Mercy Hospital’s executive director of planning, design and construction, “The steel construction modular hospital is 30 percent stronger than Mercy’s previous facility in Joplin and has glass ratings that can withstand winds up to 200 mph, which exceeds building code requirements.”

The new facility includes a full-scale emergency department, four operating rooms, a two-story inpatient wing that can accommodate more than 100 patients, a labor and delivery suite, full lab, and Radiology department. It also has all the amenities you would find in a typical hospital such as a cafeteria, gift shop, pharmacy and chapel.

Founded in 1982, Aspen Street Architects has 15 employees and has built projects at both Bret Harte High School and Mark Twain St. Joseph’s Hospital.