Suspect Caught In String Of Thefts From Vehicles 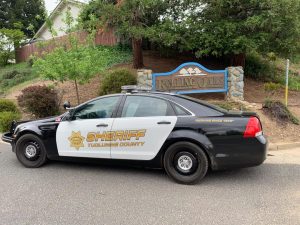 Jamestown, CA — A Sonora man has been arrested for a string of thefts from vehicles in the Jamestown area in the past two weeks.

Several reports came into the Tuolumne County Sheriff’s Dispatch regarding thefts from unlocked vehicles. Sgt. Andrea Benson details that deputies got a break when a call came in on Monday around midnight about a suspicious person on Jim Brady Road pulling on vehicle door handles. When deputies arrived in the area of the Rolling Oaks subdivision they spotted 23-year-old Christopher Means hiding by a vehicle in the driveway of a home.

While questioning Means, deputies also made a quick check of homes along the street and saw that a nearby garage door was open. The homeowner confirmed that power tools were missing and that his vehicle was unlocked with the remote door opener inside.

Deputies found the tools along with drug paraphernalia and several small plastic baggies with methamphetamine residue in a backpack Means was carrying. He admitted to the rash of vehicle thefts and was subsequently arrested for burglary, tampering with a vehicle, possession of drug paraphernalia and a controlled substance. His bail is set at $50,000.

Sgt. Benson relays deputies are attempting to return the stolen items to the rightful owners. She also cautions that this type of crime is one of opportunity and one easy way to fend off thieves is to lock your vehicle doors.