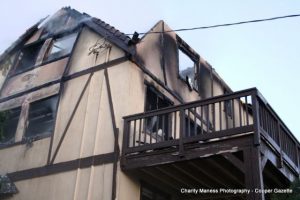 A Copperopolis duplex was destroyed by fire Sunday morning, and one person was injured.

The Copperopolis Fire Protection District reports that the first call came in at 4:23am. The structure is located in the 4500 block of Hill Top Drive. One person was living in the side of the duplex where the fire originated, and he was transported to a hospital outside the area to treat burn injuries. His name has not been released, and the extent of the injuries is not immediately known. A family living in the other side of the duplex was able to escape safely. The duplex is considered a total loss.

Other agencies that responded included the Altaville-Melones Fire Department and the Sierra Conservation Center.