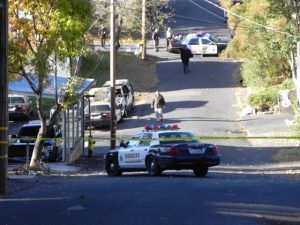 “DOJ notified the Sheriff’s Office that the evidence contained a DNA profile,” says Sgt. Jeff Wilson of the Sheriff’s Office. “The DNA was run through the Combined DNA Index System. A ‘hit’ returned to Samuel Henry Shockley, 32 of Sonora, and a warrant was issued for his arrest.”

Yesterday TCSO Detectives located Shockley at a home in the Manteca area, and took him into custody. He was booked into Tuolumne County Jail for a charge of arson.

The motive is still under investigation, but Sgt. Wilson notes that an immediate family member of Shockley was arrested by the Sheriff’s Office shortly before the arson incident, which could have been a factor.