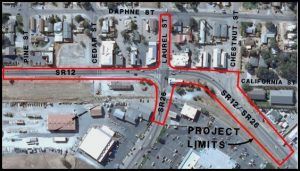 Officials are moving closer to making numerous improvements to the Highway 12/26 intersection.

The Calaveras County Board of Supervisors has a public hearing scheduled for April 10th to discuss the project, which has been under review for several years.

The project would make improvements to the existing four-way stop. Plans call for widening the traffic lanes, adding bike lanes, and creating a left turn pocket from westbound highway 12 onto southbound Highway 26. ADA ramps would be placed at all four corners of the intersection, and a short retaining wall may be built at the southwest quadrant. The goal of the project is to reduce traffic congestion and accidents at the intersection.

Up for debate on Tuesday will be whether to adopt the Mitigated Negative Declaration, which is part of the environmental review process.

The project is expected to cost under $1 million dollars. Earlier plans were scrapped calling for a $4 million traffic signal.