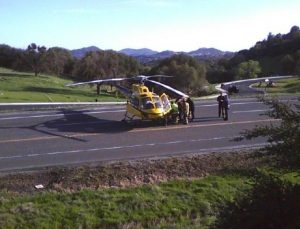 Sonora, CA — Three people were taken away by ambulance this evening following a head-on crash on Highway 108.

It happened shortly before 5pm near the turnoff to Mono Way (behind Pet Smart). The CHP reports that at least two cars were involved in the accident. Two people were flown to hospitals outside the area, and one was taken to Sonora Regional Medical Center. The CHP reports that Highway 108 was closed down in both directions for a period of time, and re-opened at around 6:15pm. The names of those involved have not been released.