Sonora: Beginning Of The “Goldwater Dynasty” 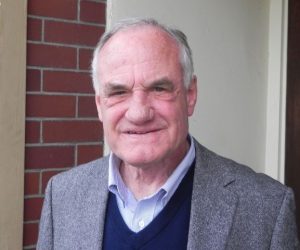 Goldwater Jr. is in Sonora this weekend to speak at the 6th annual Tuolumne County Republicans Ronald Reagan dinner at the Sonora Elks Lodge. On Friday he went by the site of his great-great Grandfather’s saloon, what was known as the G.S. Evans building along S. Washington Street.

“The Goldwater family, like so many Europeans, came over here in the 1850’s to escape tyranny,” he says. “My great-great Grandfather Mike Goldwater, and his brother, came to Sonora and established a saloon with a brothel over the top. They did pretty well for a while, but like a lot of businesses in those crazy Gold Rush days, they went broke and left. They were here about four or five years.”

Much of the original building was damaged by fire years later, and it has since been rebuilt. Today it houses a mixed martial arts facility.

“There is a lot of sentimental value to me, and I wish I could place myself back in those years,” adds Goldwater. “It would be a wonderful thing to experience, and we can only now imagine through reading.”

Goldwater’s father, Barry Goldwater Sr., was a five term Senator from Arizona, and is a conservative icon of the 1960’s. He ran on the Republican ticket for President in 1964. Goldwater Jr. followed his father into politics, and was a Congressman from 1969-1984.

Goldwater Jr. says tonight’s speech at the Elks Lodge will focus on what he calls “the opportunity” that Republicans have in 2012, with it being an election year.