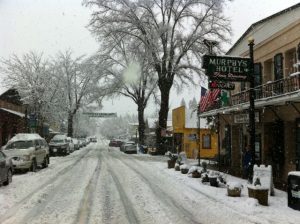 Murphys, CA – There were high hopes for the annual Irish Day festival last Saturday, but this year weather shut down the event early. The traditional parade, street fair, live music and other festive Irish activities were minimal. At 3 pm everything was canceled as it started to snow.

Parade Organizer Bob Reagan says attendance was way down and it was very discouraging. “After doing so much work organizing the parade… This was the second year in a row the weather was absolutely terrible.”

The Fire department was able to sell out the available vender booths and even had a waiting list.

The festival, held on the third Saturday in March, annually draws upwards of 10,000 people to downtown Murphys. It provides a boost to the economy, funding for charities and introduces many to the local businesses and wineries.

Irish Day is organized by the Murphys Business Association and put on entirely by volunteers. This was Reagan’s last year organizing and promoting the event, he now turns it over to Gerry and Karie Nelson.

In July 2011, Murphys Business Association President, Steve Gomez said, “If we can’t find people willing to take on these responsibilities, we will have to re-think the event. It will have to be restructured or cancelled altogether.”

Reagan was reassuring that the event and parade will continue to be held. He says the organizers will be meeting next week to determine if anything should or could be done to address the problems related to bad weather.