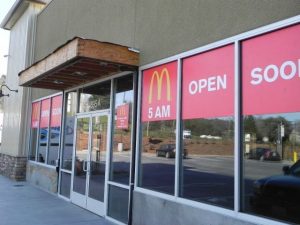 It is no longer a secret what fast food restaurant is moving into the new Standard Center next to the AM/PM Mini-Mart.

In Spring of 2009, the City of Sonora also approved plans to construct a new McDonalds drive-thru restaurant at the intersection of Highway 108 and Sanguinetti Loop. However, to this point the project has not gotten off the ground.

A new McDonalds restaurant also opened in Angels Camp back in October of 2010.