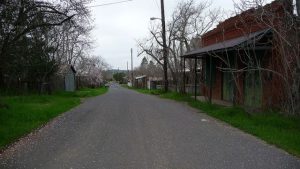 Elliott Development Group Inc. of Palo Alto, RSS Architecture of San Carlos, and Michele Lacy Interiors of Modesto, plan on revitalizing the main street and surrounding area of the near ghost town.

The company has been researching the project for eight months but it was made public when certain parts of it were submitted by the Tuolumne County Economic Development Authority for possible federal funding.

According to project coordinator, Frank Stanley, the first phase would include preparation for a Bed and Breakfast Inn at the current historic Stratton House, a restaurant, gift shop and associated retail stores. A visitor’s center will be completed with in a year as part of the first phase of 40 acres of development. Negotiations are underway for an additional 500 acres of olive vineyards, orchards, solar panels and hiking trails. An additional 120 acres South of Washington Street in Chinese Camp will also be developed for additional vineyards.

The development team is working on behalf of the property owner, Helen Carol Perry who owns the acreage between Highway 120 and Red Hills Road on both sides of main street. Stanley says the first phase of development is expected to cost about three million. Perry is the grand daughter of Dr. Stratton who was the physician in Chinese Camp.

The project designer, Michele Lacy, is known for her work on Modesto’s historic State Theatre.

Stanley says they are going to be there for ten years developing the community. They are also pitching the renovation project as a possible HD TV show. When questioned about the water district Stanely says, they have researched using well water and drilling new wells, and many possibilities are being looked at by vineyard experts.