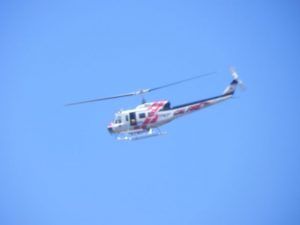 Update a 3:45 p.m.: Air and ground crews have contained an approximately five acre vegetation fire in the Sheep Ranch area of Calaveras County.

The flames broke out after 2 p.m. in the 16990 block of Armstrong Road near Hawkwind Way. Cal Fire spokesperson Emily Kilgore tells Clarke Broadcasting that the blaze is now contained and that no structures were threatened.

Several engines out of the six that were battling the flames have been released from the scene. Kilgore notes that crews still on scene will remain for the next couple of hours mopping up. She relays that what sparked the blaze is still under investigation.

Update at 3 p.m.: Cal Fire spokesperson Lindy Shoff reports that three additional engines have arrived for a total six engines on scene with more resources also headed to the scene. Further details on the fire are below.

Original post at 2:30 p.m.: Sheep Ranch, CA — Columbia helicopter 404 and firefighters are on the scene of a vegetation fire in the Sheep Ranch area of Calaveras County.

The flames broke out in the 16990 block of Armstrong Road near Hawkwind Way. Cal Fire spokesperson Lindy Shoff reports that the blaze is five acres in size and ignited in brush and timbers. No structures are threatened at this time.

There are three engines and a water tender on scene. Shoff reports that additional resources have been called to the scene. We will update you as soon as new information comes into the newsroom.