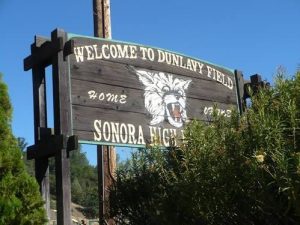 In May 2011 Tuolumne County agreed to help the Sonora Union High School District apply for grant funding for facility improvements. The Board of Supervisors voted to aprove a request by Sonora High School to receive $4 million in Statewide Park Development and Community Revitalization Program grant funds. The state Proposition 84 funding would be used to make improvements to the pool, Dunlavy Field Track, sport field entrances and Bev Barron Field which are also used by the Tuolumne Park and Recreation District.

Principal Todd Dearden has said that the track surface around the field continues to damage the artificial turf with dirt that is tracked in. The estimate for a new track is $300,000.

According to Dr. McCoy Sonora’s artificial turf can last 8-10 years in dry and cool weather, but snow and ice do damage it. The seven year old artificial turf was funded in large part as part of NBC’s “Three Wishes” reality TV show. FieldTurf, Nike and the American Soccer Federation covered nearly two-thirds of the $700,000 cost of installation. FieldTurf’s foundation is a mix of silica sand, rubber granules and ground-up pieces of Nike athletic shoes. The field is groomed every year as recommended and will need replacing in the future.