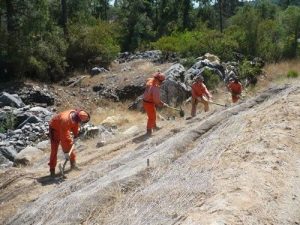 Sonora, CA — The Tuolumne Utilities District has approved a Memorandum of Understanding with CAL Fire regarding jobs performed by the Baseline Conservation Crews.

The state prisoners in the camps often perform maintenance and assist with projects for T.U.D. The state has decided it wants more of a firm agreement in place with various agencies moving forward because the livelihood of conservation camps is in jeopardy due to ongoing state budget cuts and prisoner realignment programs. In the past, the two agencies had what was described at the meeting as a “gentlemen’s agreement,” where both sides would help each other out with different projects.

The T.U.D. Board voted 5-0 to reimburse the Baseline Conservation Camp in the form of material goods or supplies equal to the sum of $200 per day, per crew, when they perform work. It also helps fund the CAL Fire Captain that is always onsite with the crews. T.U.D. Board members stated that this is a good deal for the District, and a way to keep expenses low during tough budget times.

Crews have been instrumental in helping T.U.D. over the winter months, notably with storm cleanup. During the summer months, baseline crews typically stay busy helping to suppress wildland fires in the region.