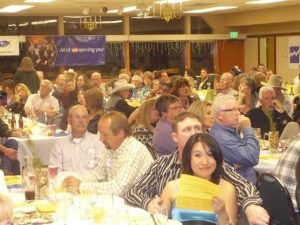 Sonora, CA – Over 300 people were hand for the sold-out annual TuCare Dinner and Auction held Saturday evening at the Sonora Elks Lodge.

Nachtigall said that the start-up group researched and uncovered 3,800 seperate entities of government, just within the Executive Branch alone.

“We know how the system works,” stated Nachtigall, “and it’s completely and totally broken”.

For more on the research conducted by California Common Sense, click on http://www.cacs.org

The evening was emceed by Mike Albrecht, who brought a groan from the crowd when he stated, “..the USA is now the largest importer of lumber in the world”. Albrecht’s point being, that the USA should be wisely harvesting and utilizing its’ own natural resources.

Supervisor Pland received TuCare’s “Excellence in Government Award”. Pland has received this award before and became the first person to ever receive the same TuCare award twice.