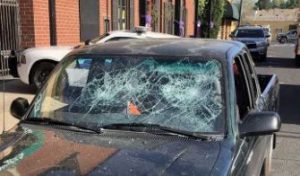 Truck with windows broken out

Sonora, CA — Most people use a hair dryer to do just that, but a Colorado woman instead used it as a weapon and is now facing battery and vandalism charges.

Sonora Police Sgt. Tim Wertz reports the incident stemmed from an argument that 38 year-old Aimee Marie Nelson had with her aunt over child issues while northbound in a truck on Washington Street just before 6 p.m. on Tuesday.  Wertz details that reaching from the open back seat window into the driver’s window, Nelson grabbed and twisted the arm of her aunt, who was driving.

The aunt pulled the pickup over and that is when Nelson allegedly jumped out and began using a hair dryer on the truck. Wertz explains, “She [Nelson] began bashing all the windows on the truck and broke almost everyone. She had some cuts on her hand that were treated at the scene and Nelson was arrested.”