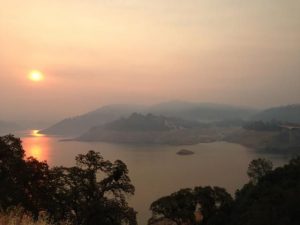 Sonora, CA — Just over half of California’s 58 counties received an F grade in the American Lung Association’s new report card looking at ozone and particle pollution.

Tuolumne County had just over 28 “high ozone days” last year where the pollution was over the healthy limit, and Calaveras County registered nearly 18 days. The report adds that Tuolumne County has over 3,600 adults, and 560 children, with asthma, 2,500 residents with COPD, 22 with lung cancer, 3,800 with cardiovascular disease and 5,900 with diabetes.

The report states that California has seven of the ten most ozone polluted cities in the United States, with Los Angeles being the top (LA had nearly 120 days in which ozone was above the healthy limit).

The report cites vehicle transportation and wildfires as two of the biggest sources of air pollution in general. Smoke during the fire season can often elevate ozone levels. Those with the lowest pollution levels were primarily along the northern California coast, and lesser populated areas near the Oregon border.