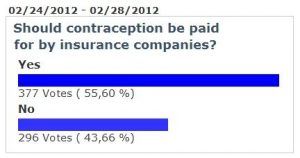 Sonora, CA — A three day informal myMotherLode poll this week asked, “Should contraception be paid for by insurance companies?” The majority 55% answered Yes, and 43% voted No.

The issue was brought up when the Obama administration mandated that religious organizations pay for their workers’ birth control. President Obama later altered the plan by saying, “If a woman works at a charity or religious hospital that objects to providing contraceptive services to her, the insurance company – not the charity, not the hospital – will be required to reach out and offer the woman contraceptive care.”

The debate has gained even more attention nationally since Mitt Romney, Rick Santorum and Newt Gingrich have brought up the subject in the Republican National Primary race.

The question will be featured in this week’s “On The Street” segment by News Director, B.J. Hansen. The people interviewed were very confident of their answer and were equally split for and against, matching the poll results. “On The Street” is a weekly vignette that airs on 1450 KVML, Star 92.7 and 93.5 KKBN. To hear the segment you can visit the Multimedia On the Street section.