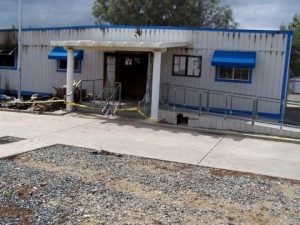 Don Pedro, CA – Mariposa Sheriff Doug Binnewies confirmed that his department is involved in the Don Pedro Community Services District administration office fire that occurred Monday morning at 2 am. The burned out office is located on Merced Falls Road in La Grange, other structures on the property were not damaged.

The Mariposa County Fire Chief, Jim Middelton, says the incident is still under investigation. Chief Middelton said that there have been times when it has taken up to a month for him to receive the official report. He noted that they are digging through a lot of debris to uncover the cause and origin of the fire. He did not have an estimate on when the investigation would conclude.

Sheriff Binnewies said that the Sheriff’s Deputy who reported the structure fire was the first to see the flames. He noted that there is a Sheriff substation in the area. The officer immediately checked, but did not find anyone in the area.

Extensive damage was done as evidence in the photos, the office will have to relocate and is working on restoring phone service.

Sheriff Binnewies said that if the fire department determines the cause to be suspicious, then a criminal investigation can proceed. Calfire is also assisting, the FBI may be notified as well.

Bennewies agreed that there is a back story but would not speculate further.

LDPCSD is a Special District incorporated in 1980 to provide water to district residents in both Mariposa and Tuolumne Counties. Customers are billed on a monthly basis for both the amount of water used and a fee to cover the assets (water system infrastructure) of the District.