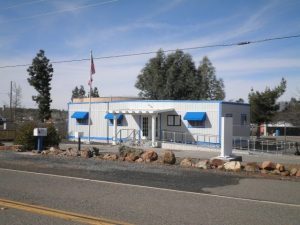 Deputy Fire Chief Jim Middleton stated that there was major damage to the administration building. Middleton stated through an aggressive fire attack they were able to keep the fire to building of origin. The building sustained major fire and smoke damage, there is no cost estimate yet. The water treatment and several other structures were not effected.

According to the Mariposa Gazette An emergency board meeting for the district has been called for this afternoon at 2 pm. The cause is under investigation.

The Lake Don Pedro Community Services District (LDPCSD) has been investigated by the Mariposa Grand Jury, the report submitted June 2011, found falsified meter readings resulted in sudden increases in service charges to customers and other issues. The full report is here (LDPCSD on page 32).

LDPCSD is a Special District incorporated in 1980 to provide water to district residents in both Mariposa and Tuolumne Counties. Customers are billed on a monthly basis for both the amount of water used and a fee to cover the assets (water system infrastructure) of the District.