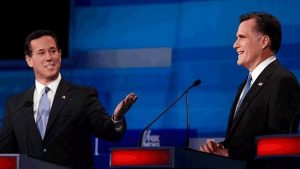 A new Field Poll shows Mitt Romney is the favored choice for President among California Republican voters, but Rick Santorum is quickly closing the gap.

The poll results were released this morning. Romney received 31 percent, Santorum 25 percent, Ron Paul 16 percent and Newt Gingrich 12 percent. It is a sharp rise for Santorum, who received only two percent in a similar poll taken last November. Newt Gingrich has taken the sharpest fall. In that same November poll, the former House Speaker had support of 23 percent of California Republicans.

Santorum ranked higher than Romney this time around when it comes to people identifying themselves as strongly conservative, supporters of the Tea Party, and Born-Again Christians.