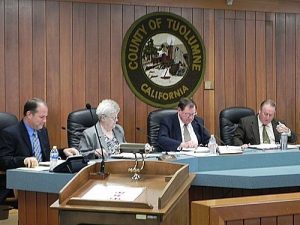 Sonora, CA — Tuolumne County is projected to end the fiscal year with a General Fund surplus of $1.7 million.

The Board of Supervisors will hear a mid-year budget report at Tuesday’s meeting. County documents show that nearly half of the surplus is the result of a “one-time audit finding in the County’s favor that will return $719,933 in court related funding to the County.” The other half is attributed to savings generated by County Departments.

The Supervisors will also meet in closed session on Tuesday to discuss lawsuits filed over the County’s handling of the Cooperstown Quarry project. Lawsuits were filed by both the City of Riverbank and the Friends of the Mother Lode.

Tuesday’s meeting begins at 9am at the Government Center in Sonora. It will be streamed live in the multimedia section of myMotherLode.com.