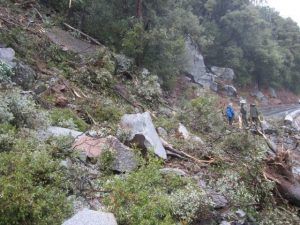 The Federal Highway Administration has determined that there is extensive damage to Big Oak Flat Road, which will result in a prolonged closure.

A rock slide damaged Big Oak Flat Road on January 22nd, and it was initially believed that there was only minor to moderate damage. However, the FHA now says a complete rebuild is needed in the area of the slide. Crews will work 24-7 in order to expedite the repair work, but it will be completely closed starting on February 29th between the intersections of Foresta Road and El Portal Road. It will then be re-opened sometime in early April, depending on weather conditions.

The Big Oak Flat Entrance Station along the Big Oak Flat Road (Highway 120) via Groveland, remains open. Visitors arriving to the park from Highway 120 will have access to Hodgdon Meadows Campground, the Tuolumne Grove of Giant Sequoias, the Merced Grove of Giant Sequoias, and the Crane Flat area. Hetch Hetchy also remains accessible along Highway 120. However, there will be no access to the popular Yosemite Valley, unless motorists are coming from Highways 140 or 41.

Park officials say the work should be completed before Easter weekend and the upcoming Spring tourist season.