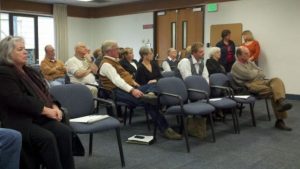 Sonora, CA — The Tuolumne County Supervisors are moving ahead with a plan to ask voters to expand the Transient Occupancy Tax.

Expanding the TOT to include campgrounds, house boats and RV parks would bring the county an estimated $350,000 a year. The additional funding would be used to help Railtown 1897 and the Mother Lode Fairgrounds.

The Supervisors voted 5-0 to direct county staff to draft a proposal to go before voters during the June election. The final proposal will have to be approved by the Board at a later meeting.

Numerous people came to speak in favor of the plan. Among those was Tuolumne County Chamber of Commerce Executive Director George Segarini, who says the proposal is endorsed by his group’s Governmental Affairs Committee.

Tim Wyman, President of the Tuolumne County Visitors Bureau Board of Directors, says his organization held an emergency meeting Monday and voted unanimously to support of the TOT expansion.

A few community members came up and asked that youth and religious camps be exempt from the TOT, which is an idea the Supervisors appeared willing to include in the final plan.

Only one person argued against the TOT expansion, saying it would send a bad message to RV users and campers considering a visit to the area.