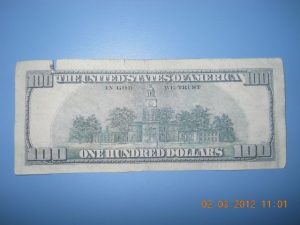 Sonora, CA — The Sonora Police Department has released new surveillance photos of the man they believe has been dispersing counterfeit $100 bills in the community.

Police Chief Mark Stinson says the suspect has been driving a 2011 silver Dodge Dakota pickup truck with a California license plate 12726A1.

The truck was rented from Enterprise Rent-A-Car in Modesto several days ago, and the money order used to rent the vehicle was purchased with counterfeit $100 bills. The truck is past its return date, so it is considered to be stolen at this point.

The truck was rented to 31-year-old Timothy Ferguson of Modesto and 38-year-old Lori Price of Modesto. However, the Police Department says Ferguson does not match the person seen in the surveillance videos, but officers would still like to speak with him. If you have information regarding the vehicle, either two subjects, or this case in general, contact the Sonora Police Department at 532-8141.

Five cases of passing counterfeit $100 bills have been reported in Sonora over the past week, and one in Angels Camp.