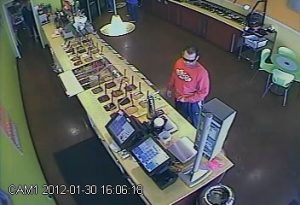 Angels Camp, CA — Similar to the City of Sonora, the Angels Camp Police Department is investigating a case where a man reportedly passed a $100 fake bill at a local business.

At this time, the Sonora Police Department does not know if it is the same suspect wanted for passing $100 bills at five Sonora businesses over the past two days.

Anyone with information about the man pictured is encouraged to contact the Angels Camp Police Department at 209-736-2567.