One Arrested In Brawl, Another Suspect Sought 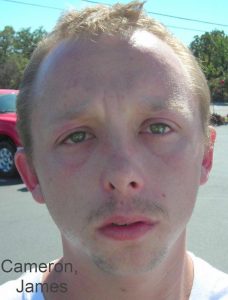 Sonora, CA – Although a fight broke out between two women outside a bar, two men are facing deadly assault charges; with one already arrested and the other still being sought by Sonora Police.

The two women came to blows on the sidewalk in front of The Office Bar in downtown Sonora at around 1:15 a.m. on Saturday. They ended up on the ground, according to Sonora Police, and it was then that the men got involved.

Witnesses reported that Travis Jahncke, 37, of Sonora, and James Cameron, 26, of Copperopolis, were with one of the brawling females and jumped into the fight. They allegedly began kicking the other woman in the head and ribs. Police note that the victim suffered injuries that required she be taken by ambulance to a local hospital for treatment.

Police were able to locate Jahncke in Sonora on Monday. He was taken into custody without incident. His bail is set at $50,000.  Cameron remains on the loose. Police are asking for the public’s help to locate Cameron. Any information on Cameron’s location please call Sonora PD dispatch at 209-532-8143.