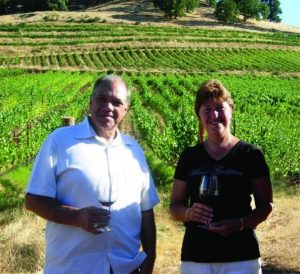 “We were hoping and praying for one gold and were ecstatic when we found out that we had won five medals from the six wines we entered,” says Lorie “We were so excited I think everyone in Jamestown could hear us screaming!”

The 2009 Montepulciano, 2009 Alianico and 2010 Fiano each garnered a gold medal. According to winejudging.com, the 2012 San Francisco Chronicle Wine Competition set a new record with an astounding 5,500 entries, surpassing its previous record of 5,050 last year. For nine consecutive years, this prestigious competition holds strong as the “Largest Competition of American Wines in the World.”

Owner Ron Gianelli stated, “My goal is to put Italian wines on the map. All of our vines are certified Italian clones. This is the time to enjoy Italian wines.” The Gianelli’s have strong ties to their family’s homeland of Liguria, Italy, and traveled back in forth to find inspiration and advisement on how to farm their property. The first vineyards were planted in 2003, and the winery plans to expand to 7,000 cases annually by 2015.

Located in Jamestown at 12581 Algerine Road, there are 14 different Italian varietals grown on 28 acres at Gianelli Vineyards. From Vermentino to Fiano, Primitivo to Agliancio, the vineyard is home to varietals that are not only uncommon in the United States, but some have never been produced before outside of Italy. Wines are produced by well-respected Sierra Foothill winemaker Chuck Hovey. The 53-acre ranch has been in the Gianelli family since the late 1800s.