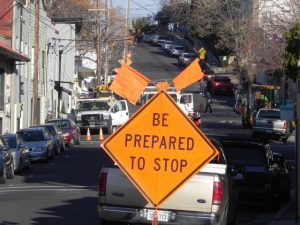 Sonora, CA — Tuolumne Utilities District (TUD) maintenance crews are working on Stewart Street between Bradford and Lyons Streets. A main water line needs repair and crews are on scene. Work is expected to last until 3pm.

According to T.U.D. spokesperson Lisa Westbrook, “An emergency repair usually means it is brought to our attention that there is a section of water line that needs immediate attention.”

Drivers in the area should use caution and expect delays.

The road between Bradford and Lyons Street (in front of the parking lot next to the former bowling alley) was initially closed as the crews set up to repair the water line at 9am. One way controlled traffic is expected in the area until crews complete the water line repairs.