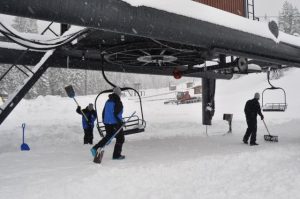 Pinecrest, CA — Officials at the Dodge Ridge Ski Area have announced they will be opening the mountain for skiing Wednesday.

According to Dodge Ridge spokeswoman, Amber Jenquin, they expect to have 80% of terrain open, with chair lifts 1, 3, 5, 6, and 7 running.

This snowstorm has brought between 18 and 24 inches of new snow on the mountain. The snow is still falling, according to Jenquin, “We are getting one inch an hour.”

It is expected to snow throughout the evening with a possible six more inches this evening. Dodge has 30 inches at summit, and two feet at base. Forecasts call for clear skies this weekend.

This is the first major snow of an unusually warm and dry season. January 25th will be Dodge’s latest opening in 12 years, and among the top five latest since it opened in 1950. The most recent latest opening dates were January 27th in 2000 and January 4th in 1987.

The resort is looking forward to a successful season despite the late opening. The new Doppelmayr T-Bar surface lift was completed this summer and will be open when there is more snow.

T643 will position skiers and riders above and beyond chairlift 8 at second summit. It will double the length of three expert ski runs above Granite Bowl and provide new access to additional acreage for advanced skiers and riders.