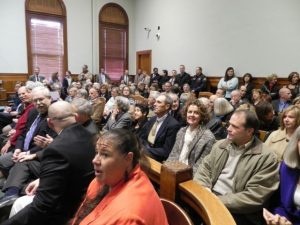 Sonora, CA — Around 100 people were on hand to see Donald Segerstrom Jr. take the oath of office to become a Tuolumne County Superior Court Judge.

A swearing in ceremony was held during the noon hour today in Department One of Tuolumne County Superior Court. Presiding Judge Eric DuTemple administered the oath of office, and praised Segerstrom for his “integrity, fairness and work ethic.”

Segerstrom later thanked everyone that came out, and he introduced various family members that were on hand. He joked that his mother will be happy that he finally “has a real job.”

Segerstrom also individually thanked members of his office, colleagues, the Governor, and gave special recognition to his Assistant DA Michael Knowles. The Tuolumne County Supervisors are planning to appoint Knowles to Segerstrom’s DA position at the next Board meeting.

Segerstrom ended the ceremony by saying, “I’m ready to get to work.” He takes the position of retiring Judge Douglas Boyack.