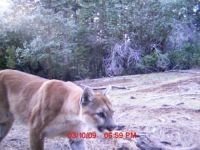 Twain Harte, CA – A Mountain Lion that was killing goats in the Twain Harte area was trapped and euthanized last Thursday.

According to Nathan Graveline, Wildlife Biologist for The Department of Fish and Game, when personal property, including livestock, is damaged a depredation permit may be issued. It was confirmed that three goats were killed over a period of several days by this Mountain Lion.

Ron Anderson the USDA trapper for Tuolumne County was authorized by the Department of Fish and Game to trap the animal. The Mountain Lion was trapped near Knox drive in Twain Harte. Graveline reported that it was a middle aged male, approximately 130 pounds, average size for the area.

Graveline said that residents are encouraged to keep goats, sheep and even cattle in a barn or enclosure with a top at night to discourage Mountain Lions. Graveline stated that mountain lions are more likely to go for easier food sources given the dry conditions. The unusually warm winter has scattered the deer at higher elevations making them harder for mountain lions to find.