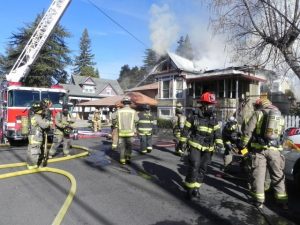 Sonora, CA — Firefighters are investigating the cause of a blaze that destroyed a Victorian style apartment building near downtown Sonora.

City Fire Chief Mike Barrows says there were multiple apartments inside the building in the 400 block of S. Stewart Street. An ambulance took one person to Sonora Regional Medical Center to treat smoke inhalation. Around 10 other people are being assisted by the Red Cross. Barrows says the H.U.D. apartments were primarily for people with low income or disabilities.

The building is considered a complete loss.

Traffic has been slow in the area, and officials have blocked off a portion of S. Stewart Street near Restano Way. When firefighters started attacking the blaze, a T.U.D. main water line broke near Restano. T.U.D. crews are on scene making needed repairs.