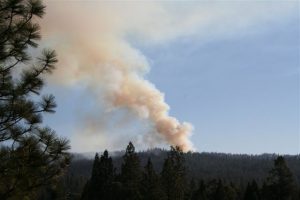 Groveland, CA — Crews are on scene of a vegetation fire burning along Ponderosa Way in the Big Oak Flat-Groveland area.

CAL Fire reports that it is around an acre in size. Because of the steep terrain it has been difficult to fully contain. Some homes are in the area, but they are not considered to be at risk. Crews from various fire agencies are on scene working to extinguish the fire this afternoon.