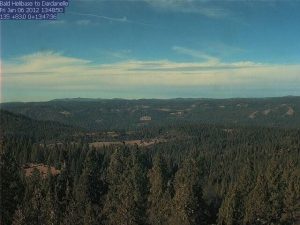 Twain Harte, CA– The unseasonably warm weather is getting a mixed reaction from area businesses.

There is no doubt that it is bad for area lodging and vacation rentals that rely on skiers during the winter months. Mike Yaley, Director of Pinecrest Chalet, which offers rental cabins, says business is down 50% from last year. Over the Christmas break many people canceled their reservations. Some visitors came to enjoy Pinecrest Lake, but Yaley expects that if Dodge Ridge doesn’t get snow in January that business will be down 75%.

The report from last night’s Twain Harte Chamber of Commerce meeting was that people are out enjoying the weather and shopping. Chamber of Commerce Office Manager Jerrie Rhine says many people visited during the recent holiday break to take in the nice weather, but fears the tourist numbers will decline significantly if the ski season does not startup. She believes Twain Harte is doing far better than the Tahoe area where people visit exclusively for the skiing.

Sally Helm, owner of Dodge Ridge, is crossing her fingers in hopes of snow arriving soon. A big event is scheduled for later this month, the Family Winter Carnival, on January 28th and 29th. Helm says, “We remain optimistic the we will have snow to be open for that event.”

Helm says of the weather, “We experience this from time to time.” She adds, “When the high pressure stays like this, all we can do is just wait for the snow.”

To put it all in perspective, Helm provided the following late opening dates for Dodge Ridge:

The Stanislaus National Forest Permit that Dodge Ridge operates under allows the resort to be open when there is enough snow for skiing. If there is snow in May they could be open, and they are ready for the season to start as soon as there is snow to do so. They have no plans to cancel the season, if say, snow still hasn’t arrived within the next month.

It appears that some people who would have been skiing this winter may be taking up ice skating instead. Long Barn Lodge General Manager Debbie Sharp says business has been up at the skating rink. They extended their hours this week to accommodate families who children are still on winter break from many places including San Francisco, Modesto, and Oakdale. The ice shavings swept off the rink by the Zamboni machine have also created a small sledding hill and a bit of “snow” that guests enjoy.