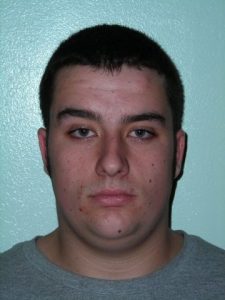 Officers pulled up to a residence in the 300 block of Hospital Road on Wednesday because the county’s Department of Child Welfare Services had requested that they conduct a welfare check on some children. A man was sitting in a 1999 Isuzu Trooper and immediately sped off when he saw the officers.

The PD was able to get the license plate number, and quickly found that the SUV was a stolen vehicle. People inside the home told officers that the man was 23-year-old Dustin Stevens of Sonora, and he had come over hoping to sell the Isuzu for $500.

Officers lost track of the vehicle, but then found it abandoned near the residence. The CHP was assisting at this point, and located a shirtless man walking in the area. It was Stevens, but he gave the CHP officer a false name. The officer knew he was lying because Steven’s last name was tattooed on his back. At that point, Steven’s admitted who he was, and was taken into custody.

Back at the home on Hospital Road, deputies went inside and found a white powdery substance on a mirror, which tested positive for methamphetamine. Packaged meth was also found in reach of two children at the home, an eight year-old girl and four month-old girl. The father of the children, 29-year-old Juan Velazquez Herrera, was arrested.

Child Welfare Services and the PD continued to investigate and found spoiled food throughout the kitchen, trash was packed underneath the house, and the backyard had pools of raw sewage.