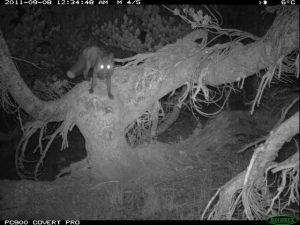 Sonora, CA — As reported earlier this week, federal officials are reviewing whether to offer Endangered Species protection to the Sierra Nevada Red Fox, as a small population was discovered in the Humboldt Toiyabe National Forest.

The rare fox has also been spotted in Tuolumne County. The Central Sierra Environmental Resource Center, based in Twain Harte, has supplied this photo that was taken in September in Tuolumne County, in the area off Sonora Pass. The fox visited one of CSERC’s stations and was captured by a motion-sensor camera.

The subspecies is typically found living above 4,000 ft. elevation, unlike the gray fox that is found in the lower elevations.

In deciding whether to grant Endangered Species protection, the FWS is reviewing potential threats including off-road vehicles, fire suppression, livestock grazing and logging. They will also accept comments from the public until early March before making a decision on whether to list the fox on the Endangered Species List.

More information can be found about the Sierra Nevada Red Fox at the Forest’s Services website. You can click here.