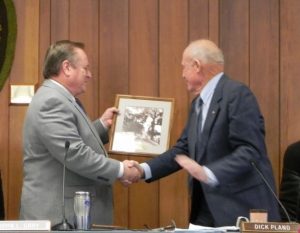 Sonora, CA — The Tuolumne County Board of Supervisors elected Dick Pland as the Chairman for 2012. Pland represents District 5 and recently announced he will not run for re-election when his term is up after this year.

Pland was approved unanimously and takes the gavel from outgoing Chairman John Gray. Pland praised Gray for his calm leadership in the face of many budget challenges over the past year.

Supervisor Randy Hanvelt from District 2 was elected as Vice Chair.

On a related note, Board of Supervisor Districts 1 and 4 are also up for election in June. A number of candidates have submitted their papers, and you can find an earlier story by clicking Campaign Season Kickoff.