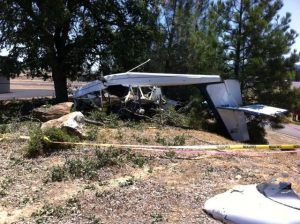 Groveland, CA — Officials are on scene of a plane crash near the Pine Mountain Lake Airport.

Sgt. James Oliver of the Tuolumne County Sheriff’s Office says the plane was coming in for a landing and was about half-way down the runway when it somehow got off track and clipped a tree. It then proceeded to go down off the side of the runway. There were two people inside, and both were taken by ground ambulance to an area hospital.

The Sheriff’s Office says the extent of the injuries is not immediately known. A fire official on scene reported to us that both were in stable condition when they departed to the hospital.

The Sheriff’s Office is awaiting officials to arrive from the FAA and NTSB to investigate the crash further. The make and model of the plane is not immediately clear. It is shown in the picture.