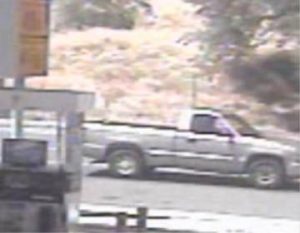 San Andreas, CA — The suspect wanted in connection with yesterday’s fatal motorcycle crash in Calaveras County turned herself in to the San Andreas CHP unit. Shortly after the crash, the CHP asked for the public’s help and released a photo of the pickup truck believed to have been involved in crash. Today 54 year-old Connie Ann Day of Valley Springs turned herself in. She was arrested and charged with felony hit and run and manslaughter.


The CHP says Day was driving a 2002 GMC Sierra on Highway 49 around 11:30am when she turned in front of 57 year-old Charles Bray of Cashmere, Washington riding a 1995 Harley Davidson. Bray swerved into oncoming traffic and hit another car head on. Bray was pronounced dead at a local hospital.