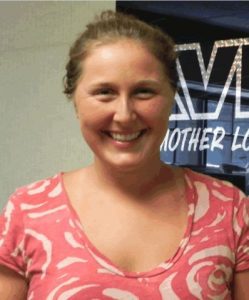 The English Channel is the twenty-two mile long body of water between England and France. Less than 1,700 people have successfully swam it.

Teri Wells was Friday’s KVML “Newsmaker of the Day”.

Wells is a twenty year old native of Tuolumne County who graduated from Sonora High School in 2011. She attended Columbia College and plans on attending UC Davis this Autumn.

Swimming has been a part of Well’s life since the age of five when she joined Tuolumne County Aquatics (TCA). Wells participated in every water-related sport at Sonora High School and she currently spends five to six days per week swimming at Sonora Sports & Fitness. Wells swims anywhere from four thousand to five thousand yards per day.

Wells TCA Coach swam the English Channel ten years ago and inspired Wells to want to do the same. Additionally, Wells is a coach for the Sail Fish program at Sonora Sports and Fitness, which includes kids ages five through nine, and would like to inspire the children by swimming the English Channel herself.

During the summer, the water temperatures in the English Channel are typically around sixty degrees. Wells has been trying to acclimate herself by swimming in cold salty water and is in the middle of training vigorously for nineteen weeks before her full attempt to swim the channel. She recently swam in Santa Cruz and spends weekends swimming for numerous hours in the San Francisco Bay.

Wells says that “her tide” (when the currents are safest) will range from July 27th through August 2nd. A pilot boat will be hired to cruise slowly beside her.

In addition to the challenge of training and the swim, Wells needs to raise about $15,000 to turn her dream into a reality. Wells said she only has about $5000 left to go.

Wells leaves for England on July 17th. A bank account for donations has been set up at Mother Lode Bank.

Yo Good Yogurt in downtown Sonora will donate funds from purchases all day on Friday July 5th.