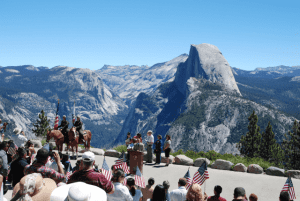 Yosemite, CA — As the U.S. Senate approves an immigration bill and it now heads to the House, several people became citizen right in Yosemite National Park today. The Park hosted a special Naturalization Ceremony at Glacier Point this morning. This was the fourth ceremony held at the park and it was the largest with 64 people who can now call themselves United States citizens. The applicants immigrated from all over the globe including: Thailand, India, England, and Mexico.


The park teamed up with the U.S. Citizenship and Immigration Services Fresno office.