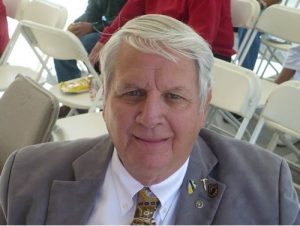 Smart was Thursday’s KVML “Newmaker of the Day”.

Smart spent seven years on active duty, including a one-year tour in Vietnam with the famed First Cavalry Division (Air Mobile) as a Combat Reporter / Photographer.

Several locals throughout the Mother Lode know Smart as being actively involved in regional veterans’ affairs, Habitat for Humanity of Tuolumne County and the 49er Rotary Club of Sonora. Smart is also both retired and a grandfather. Some residents may recall that his former work life included being a manager at the Wal Mart in Sonora.

Smart has been thinking of writing a book for several years, but finally became serious about it two years ago.

“It was a whole new experience for me,” says Smart. “But once I started to type the story, it was difficult to stop.”

The final result is a nearly 200 page book published by Tate Publishing called, “Assignment in Samarra”.

The story is a work of fiction, however, Smart quickly adds that nearly everything contained in the story, which is set in 2011 Iraq, is based on real life locations and researched stories of ambush by muslim radicals on american contractors.

The main character in the book is Vietnam veteran Jack Spraggin who now finds himself in Iraq. Smart used his own real life experience to put himself in the mind of Mr. Spraggin.

Overall, Smart hopes that readers will be both entertained and area able to learn about a U.S. veteran’s determination to be victorious during the most dire and dangerous of circumstances.

“Assignment In Samarra” will officially be released in July, but advanced copies are available now locally. Smart will have these copies with him and will personally sign his book at Schnoog’s Cafe and Espresso (1005 Mono Way Sonora, CA) this Saturday from 1 – 3PM. The book is $12.99.