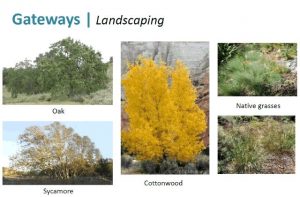 Sonora, CA — Preliminary plans are being drawn up as part of the Vision Sonora Project.

Funding to complete the project came from a $225K state grant. Back in January four days of workshops were held at the Sonora Opera Hall where residents could weigh in on ways they would like to see the downtown district improved over the coming years. The final plan will be used as a guide, and used to help secure grant funding to construct the projects. The Vision Sonora effort is being overseen by the City of Sonora and Tuolumne County Transportation Council.

The Vision Sonora Advisory Committee met this week and got a sneak peek at some of the preliminary ideas drawn up by consultants. City of Sonora Community Development Director Rachelle Kellogg reports that the final version of the plan will be unveiled at a town hall type community meeting in September. Some of the initial ideas will likely be revised, as the plan is still a work in progress. This Fall the Sonora City Council is expected to vote on the plan’s adoption.

Early ideas include a multipurpose trail down Stockton Road, outdoor restaurant seating in the downtown district, additional trees, community plazas, and new signage. Click on the photos to get a sneak peak.