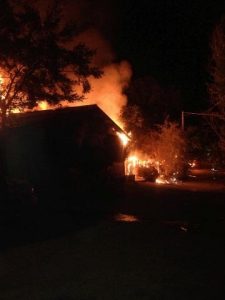 A weekend fire in Jamestown originated in a mobile home and quickly extended to a neighboring duplex.

CAL Fire officials report that it started at around 2:45am Sunday. The fire started in a 7th Avenue mobile home that was scheduled for demolition this week. It quickly moved to a nearby duplex, destroying one side, and causing smoke damage to the other. The duplex is located near the 9th Avenue intersection.

Another neighboring duplex had minor damage as well due to radiant heat. Thankfully, no one was injured in the blaze. The residents living in the duplex that was destroyed were not home, and those living on the other side were able to safely escape. Tuolumne County Sheriff’s Deputies were instrumental in notifying the residents.

CAL Fire is still investigating what sparked the blaze.